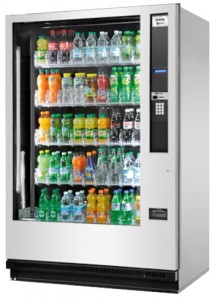 Yes, you heard right – to grab a tasty drink from a vending machine without having to pay out for it, all you need to do is perform enough keepy-uppys.

The vending machines have been released across America and Europe in time for the World Cup. Customers must “keep up” an imaginary ball on screen by standing in front of the vending machine which has a built-in motion sensitive screen. The technology is exciting as when enough keepy-uppys are recorded, the vending machine will dispense the chosen soft drink.

Players who enter the game’s Hall of Fame mode can win special prizes, although it is as yet unknown what these will be.

Twenty such vending machines have been released across the two continents but we could be seeing more in the future.

What a great idea to celebrate the World Cup and encourage sports and social interaction! See, vending machines can offer a whole lot more than just an ice cold, thirst-quenching beverage!